skip to main | skip to sidebar

Red Light for Uranium Mining in Quebec:
Quebec meillure mine Coalition Welcomes Independent Panel’s Conclusions
http://www.miningwatch.ca/news/red-light-uranium-mining-quebec-quebec-meillure-mine-coalition-welcomes-independent-panel-concl
FOR IMMEDIATE RELEASE  [French text follows below]
(Quebec, July 17, 2015) The Coalition pour que le Québec ait meilleure mine welcomes the conclusions of the Quebec Environmental & Public Hearings Panel (BAPE), which concluded that the risks and uncertainties of the mining of uranium relating to health and the environment are still too numerous to allow it to proceed. The BAPE concluded that in the current context, “it would be inappropriate to authorize uranium mining in Québec.” (Summary Report, p.2)
Quebec called to ban uranium mining
“We are very pleased with the findings of the report of the BAPE, which after more than a year of analysis and dozens of public consultations in the four corners of Quebec, confirms what we have been saying for years: the risks and uncertainties uranium mining on health and the environment are still too numerous to allow their operation,” says Dominique Bernier, coordinator of the Coalition Québec meillure mine.
“We now ask Quebec to implement the conclusions of the BAPE and follow the examples of British Columbia and Nova Scotia in legislating against the development of such mines in Quebec,” said Ugo Lapointe of MiningWatch Canada and co-spokesperson of the Coalition Québec meillure mine.
Radioactivity: at the heart of the issue
In the comprehensive 626-page report, the BAPE concluded that the radioactivity of the ore and mining waste that is left behind form the heart of the acceptability challenge faced by this industry. Each mine typically produces thousands of tons of mining waste containing a cocktail of toxic elements, including several that remain radioactive in the very long term (thousands of years). Despite improvements in recent years, the BAPE is not satisfied with the current methods and technologies to maintain the long-term safety of uranium sites. The BAPE also fears the high cost that these sites could leave for society over the long term, both environmentally and economically.
A socially unacceptable sector
Given the risks and uncertainties of uranium mining, the BAPE also notes that this industry enjoys no social acceptability in Quebec. During the hearings, a vast majority of intervenors were against the sector, in addition to many organizations that have taken formal positions, including hundreds of municipalities and all First Nations in Quebec.
The Coalition will respond in detail to the full report in a forthcoming communication.

To all those concerned about uranium mining:
The Quebec Environmental Public Hearings Office (le Bureau d'audiences publiques sur l'environnement) has announced that it will be holding a preliminary series of pre-consultations on the question of uranium mining from May 20 to June 23 (see the official announcement [in French] at l’annonce du BAPE).

We urge individuals and organizations to take part in these pre-consultations, especially those in Montreal May 20-21 and at Chelsea in the Ottawa region on May 22.

These pre-consultations hearings will serve to indicate to the BAPE what are the main aspects that we want them to analyse during their one-year mandate, from May 2014 to May 2015.  These pre-consultations will be followed by in-depth hearings that will take place in the Autumn of 2014.
Here are some examples of aspects of uranium mining that we think ought to be emphasized.
You can also suggest to the BAPE the names of experts, studies that have been done, uranium sites that can be visited by the Panel, as well as any other information that you think the Panel should have.

Bill 70, an act to amend the Quebec Mining Act, came into force this week in Quebec.

The bill heralds significant reforms to the Mining Act.  Here are some highlights that will be of great interest to WQCAMU and citizens in the West Quebec region:
For more information (in French):  http://www.assnat.qc.ca/en/travaux-parlementaires/projets-loi/projet-loi-70-40-1.html

To all who have supported the work of WQCAMU over the last six plus years many, many thanks. It goes to show that a few people working together as a coalition can in fact help make changes happen.

Special thanks to Ecojustice who did some heavy lifting on the legal side of mining act reform and to the coalition Quebec Meilleure Mine who did the heavy lifting on convincing the Quebec Government that change was long overdue.
at 18:39

For the third time the Quebec government has brought forward mining act reform and has failed.  According to some this inability to make changes to outdated legislation is unprecedented in Quebec.

For more on the story:  http://www.quebecmeilleuremine.org/sites/default/files/QMM-Devoir-r6-3.pdf
at 06:49

Here is a good article in the Montreal Gazette explaining some of the latest developments:

Update on Bill 14 - Amendments to the Quebec Mining Act

The Nation has recently published an update on the proposed amendments to the Quebec Mining Act. It is unclear why these amendments have stalled in the legislature.

Bill 14 - An Act to Amend the Quebec Mining Act

There may be a ray of light in rural municipalities and cottage country in West Quebec.

According to a report on Forbes.com, Bill 14, a bill that would amend the existing Mining Act, proposes the following:

"...mining activities would be withdrawn from urban perimeters and “areas dedicated to vacationing.” The Mining Minister would be able to exclude these zones and refuse certain mining rights in order to avoid conflicts with other territories.
The bill is currently seeking legislation."
While this does not address all of WQ-CAMU's objectives, nor those of the broader coalition Pour que le Quebec ait Meilleure Mine!, it is somewhat encouraging. (Note we do not intend to speak on behalf of the broader coalition here.)
We at WQ-CAMU have been fighting for this type of reform for some years. Our efforts to advocate changes to the Quebec Mining Act may be contributing towards progress (we say guardedly). We have had numerous communications over the last four years with the Government of Quebec to encourage it to be more balanced in how it manages lands and avoids conflicts.
It is somewhat surprising that the mining industry itself doesn't seem to disagree with settling the conflict once and for all around higher population centres. We consider it a reasonable compromise on this aspect of a complex problem.
Much more needs to be done, but it is a step in the right direction.
More on the story: http://www.forbes.com/sites/kitconews/2011/08/24/mining-industry-keeping-an-eye-on-bill-14/

Much of the recent controversy about uranium exploration and mining in West Quebec has centred around the exploration activities of a few junior mining companies. Apologists argue there is "no danger" from exploration and there are "no negative effects related to this activity." They typically go on to say something like "there is no project of opening a mine in your area" [yet].

I beg to differ, unfortunately. The "dangers" and "negative effects" of uranium exploration include the following:

It seems that some (many?) people in public health agencies and politics in particular fail to perceive the negative implications of mining claims and exploration activities.

I guess until a claim has been made against your property, it is too difficult to grasp the ramifications. Sadly in this case there appears to be no substitute for experience.

The current conflict between property rights and mining rights in Quebec (and elsewhere) involves many contradictions and opportunities for misunderstanding. Here are some examples: 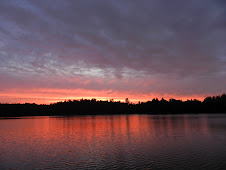 Exploration and mining companies have enjoyed privileged and preferred access to land ahead of municipalities, the general public and private land owners. The mining regime in Quebec has bred unnecessary conflict and can pose a serious risk to environmental stewardship. Three successive attempts at amendments to the Quebec Mining Act have failed over the last few years until finally a fourth effort was successful. Now we watch carefully to see what the new Government of Quebec will do under renewed pressure by the mining lobby.